Fibrous and serofibrinous pericarditis represent the same basic process and are the most frequent type of pericarditis. Common causes include acute myocardial infarction (MI), postinfarction (including Dressler syndrome), uremia, radiation, RA, SLE, and trauma. Severe infections may also cause a fibrinous reaction, as does routine cardiac surgery.

Purulent or suppurative pericarditis due to causative organisms may arise from direct extension, hematogenous seeding, or lymphatic extension, or by direct introduction during cardiotomy. Immunosuppression facilitates this condition. Clinical features include fever, chills, and spiking temperatures. Constrictive pericarditis is a serious potential complication.

Until proven otherwise, caseation within the pericardial sac is tuberculous in origin. Untreated, caseous pericarditis is the most common antecedent to chronic constrictive pericarditis of a fibrocalcific nature. 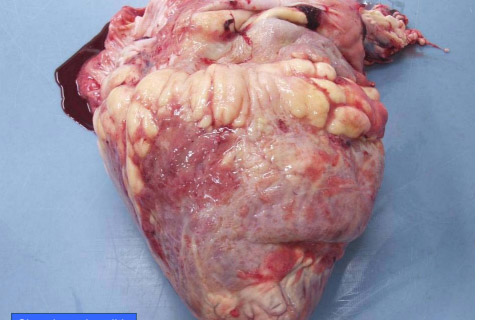 Adhesive mediastinopericarditis is a reaction that usually follows suppurative or caseous pericarditis, cardiac surgery, or irradiation. This condition is rarely caused by a simple fibrinous exudate. The pericardial potential space is obliterated, and adhesion of the external surface of the parietal layer to surrounding structures occurs. Clinically, systolic contraction of the ribcage and diaphragm and pulsus paradoxus may be observed. The increased workload may cause massive cardiac hypertrophy and dilatation, which can mimic an idiopathic cardiomyopathy.

Constrictive pericarditis is usually caused by suppurative, caseous, or hemorrhagic pericarditis. The heart may become encased in a 0.5-cm–thick to 1-cm–thick layer of scar or calcification (concretio cordis), resembling a plaster mold. Contrary to clinical findings in adhesive mediastinopericarditis, the heart cannot become hypertrophic or dilate because of insufficient space.

Imazio et al suggest that constrictive pericarditis is a rare complication of viral or idiopathic acute pericarditis (< 0.5%). However, it appears to be comparatively frequent for specific etiologies, especially bacterial

Tamponade is more common in patients with malignant pericarditis. Effusions caused by tumors often progress to tamponade, eliciting bleeding in the pericardium. Blood accumulates more rapidly than a transudate or exudate and more commonly causes tamponade.

Identification of any pericardial fluid in the setting of penetrating injury to the thorax or upper abdomen requires aggressive resuscitation; penetrating cardiac injuries may occur, with hemopericardium as the most common feature. In acute massive hemopericardium, the time is insufficient for defibrination to occur. The hemopericardium organizes and may partially clot, resulting in a pericardial hematoma. The hematoma may appear echogenic instead of echo free.

Potential sources of iatrogenic cardiac perforation include central line placement, pacemaker insertion, cardiac catheterization, sternal bone marrow biopsies, and pericardiocentesis. The right atrium is the most common site of perforation from catheter placement. Perforation, as well as direct catheter infusion of fluids, can cause tamponade. In fact, a tamponade delay of hours to days has occurred secondary to catheter misplacement.

In one case report, tamponade was described as the first manifestation of dermatopolymyositis.

Specific causes of pericarditis include the following and are briefly reviewed below:

-Infectious conditions, such as viral, bacterial, and tuberculous infections

-Inflammatory disorders, such as RA, SLE, scleroderma, and rheumatic fever

-Metabolic disorders, such as renal failure, hypothyroidism, and hypercholesterolemia

Chronic idiopathic pericarditis is defined as a pericardial effusion that persists more than 3 months without any apparent etiology. Pericardiocentesis alone results in resolution of large effusions; however, recurrence is common.

Viral infection is the most common cause of acute pericarditis and accounts for 1-10% of cases. The disease is usually a short self-limited disease that lasts 1-3 weeks and can occur as seasonal epidemics, especially coxsackievirus B and influenza.

Patients may have associated myocarditis. Pericardial involvement is frequent in persons with HIV, but is usually an asymptomatic pericardial effusion of small volume. Individuals with advanced HIV infection develop pericardial involvement more frequently, with one study noting right atrial diastolic compression in 5% of cases involving advanced HIV infection. Symptomatic pericarditis occurs in less than 1% of cases involving HIV, and its etiology can include the usual causes, opportunistic infection, Kaposi sarcoma, and HIV.

Bacterial infections accounts for 1-8% of pericarditis cases and result from direct pulmonary extension, hematogenous spread, myocardial abscess or endocarditis, penetrating injury to chest wall from either trauma or surgery, or a subdiaphragmatic suppurative lesion. Purulent pericarditis may result from previous aseptic pericarditis, and a high percentage of patients develop constrictive pericarditis.

Anaerobes have also been isolated in 40% of patients in reviews of the pediatric population.

Previously, Pneumococcus was the predominant organism. However, in the antibiotic era, staphylococcal and gram-negative species have become more common. Most cases are now associated with thoracic surgery, renal disease, and immunosuppression.

Tuberculosis accounts for 4% of cases and should be considered in all instances of pericarditis without a rapid course, especially in high-risk groups, such as elderly patients in nursing homes and those with acquired immunodeficiency syndrome (AIDS). Approximately 50% of affected patients develop constrictive pericarditis.

Fungal organisms that may cause acute pericarditis include Histoplasma, Blastomyces, Coccidioides, Aspergillus, and Candida. Parasitic organisms includeEntamoeba, Echinococcus, and Toxoplasma.

Pericarditis occurs predominantly in males with severely destructive and nodular RA. The pericardial involvement is usually clinically silent, with the diagnosis made in only 2% of adults and 6% of juveniles with RA. Rarely, pericarditis precedes the onset of RA. Autopsy studies show a pericarditis prevalence of 11-50%.

Clinically evident pericarditis has been reported in 25% of patients with SLE and usually occurs in lupus flare-ups, but it may be the presenting manifestation. Autopsy series reveal pericardial involvement in 62% of lupus patients.

Pericarditis is recognized in 5-10% of patients with scleroderma, with a 70% autopsy prevalence. Pericardial effusions occur in 40% of patients with scleroderma and can be due to scleroderma, myocardial failure (restrictive cardiomyopathy), and renal failure. Restrictive cardiomyopathy and pericardial constriction can coexist. Usually, pulmonary hypertension, right heart failure, and systolic dysfunction occur.

Sarcoidosis may result in pericarditis, but this condition rarely causes cardiac tamponade or constrictive pericarditis

Pericarditis in those with rheumatic fever occurs more commonly in lower socioeconomic groups and in children, often accompanying endocarditis and myocarditis, with a worse prognosis. Consider rheumatic fever as an etiology in any child with pericarditis. However, this disease is not a demonstrated cause of constrictive pericarditis.

In adults, pericarditis may not occur with myocardial or valvular involvement, and it is associated with a better prognosis. The pericarditis usually appears 7-10 days after the onset of fever and arthritis. Often, stage 1 electrocardiographic (ECG) findings are absent (see Electrocardiography).

The following conditions may also cause acute pericarditis:

Renal failure accounts for approximately 12% of cases of pericarditis. In the predialysis era, pericarditis developed in 35-50% of patients with uremia who had chronic renal failure and less commonly in those with acute renal failure. Death often followed in several weeks. With dialysis, the pericarditis incidence rate is less than 10%; however, this condition occurs after the onset of dialysis in 8-12% of cases.

Cholesterol pericarditis, also called gold-paint pericarditis, is a complication of a chronic pericardial effusion exacerbated by cholesterol crystals. It usually presents with large effusions that are not hemodynamically important, and development of constriction is rare. Granulomatous pericarditis has been implicated in some cases.

After a transmural infarction, a fibrinous pericardial exudate appears within 24 hours, begins to organize at 4-8 days, and completes organization at 4 weeks.[12, 13] Pericardial pain occurs less frequently than the friction rub, which is often detected on the second or third day after an acute MI but may be heard within 24 hours and as late as 10 days.

This syndrome may be a unique autoimmune-mediated phenomenon to myocardial antigens, or it may merely be an unrecognized post–MI pericarditis. Patients may develop pulmonary infiltrates and large pericardial effusions.

Because of the risk of hemorrhagic pericarditis, anticoagulant therapy should be stopped in patients with Dressler syndrome.

Aortic dissection accounts for 1% of cases of acute pericarditis, especially for cases with hemorrhage into the pericardium.

Malignancy account for 5-17% of pericarditis cases; in patients presenting with acute pericarditis or pericardial effusion, 4-7% have an unsuspected malignancy. Primary neoplasm of the heart and pericardium is rare; most cases of neoplasm-related pericarditis are a result of metastatic disease. Autopsy studies have noted that approximately 10% of patients with cancer develop cardiac involvement, and it is often clinically silent. The neoplastic cells reach the pericardium through the bloodstream, through the lymphatic system, or via local growth.

Neoplastic disease, particularly advanced disease, is the most frequent cause of tamponade in the hospital. Occasionally, the tumor encases the heart and causes constrictive pericarditis rather than tamponade.

Pericardial mesothelioma and angiosarcoma are lethal malignancies with aggressive local spread that respond poorly to treatment. Infants and children can present with a teratoma in the pericardial space. These can often be successfully removed.

Lung cancer, including adenocarcinoma and squamous and small cell carcinoma, accounts for approximately 33% of cases; breast cancer accounts for 25%; leukemia and lymphoma, including Hodgkin and non-Hodgkin, account for 15% of cases; and malignant melanoma represents another 5%. Almost all other malignancies, except primary brain, comprise the rest of the cases. Kaposi sarcoma has also become a more prominent cause of neoplastic disease with the AIDS epidemic.

Some medications, including penicillin and cromolyn sodium, induce pericarditis through a hypersensitivity reaction. The anthracycline antineoplastic agents, such as doxorubicin and cyclophosphamide, have direct cardiac toxicity and can cause acute pericarditis and myocarditis.

Smallpox vaccination infrequently leads to myocarditis. In a review of a large vaccination program in the US military, approximately 12 per 100,000 vaccinated troops developed myopericarditis within 14 days of vaccination.[14, 15] Whether this was due to a direct viral cytopathic effect or an immune-mediated phenomenon is unclear.

Pericardial disease is the most common cardiac toxicity from radiation therapy. Others are coronary artery disease, conduction disturbance, and myocardial and valvular disease.[16] A high incidence of such toxicity occurs with high doses, especially those greater than 4000 rad.

Electrophysiologic studies, radiofrequency ablation, pacemaker implantation, and percutaneous coronary intervention are among several invasive cardiac procedures that can cause pericarditis.

Pericardial effusions can occur in the absence of typical features of postpericardiotomy syndrome. In one study, 56% developed pericardial effusions early after cardiac surgery, without correlation to pericarditis or tamponade. The effusions were more common after heavy postoperative bleeding.

Approximately 1% of cases of acute pericarditis are caused by trauma, such as penetrating and nonpenetrating cardiac trauma. Also consider esophageal rupture or perforation and pancreatitis.

A Mixed Phenotype of Airway Wall Thickening and Emphysema Is Associated with Dyspnea and Hospitalization for Chronic Obstructive Pulmonary Disease.

Radiological Approach to Asthma and COPD-The Role of Computed Tomography.